What are Mason Jars?

What are Mason Jars? 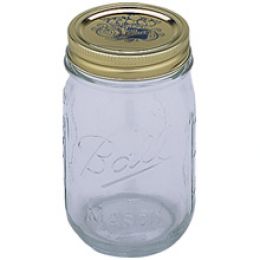 Although Fowlers Vacola preserving jars might be more familiar to Australian food preservers, the Mason Jar truly revolutionised the home-preserving of food in the mid 19th century. The Mason jar was invented by an American tinsmith – John Landis Mason – who patented his design in 1858.  The moulded glass Mason jar was sealed with a clever 2 piece screw on-metal lid. As the hot contents of the Mason jar cooled the lid was contracted to provide an airtight seal.  The clear (and often tinted) glass permitted a good view of the contents, unlike earlier opaque and stoneware food jars. Mason jars were the first glass containers to be manufactured commercially, with companies like Ball taking advantage of the fact that John Landis Mason surrendered his patent rights. Mason jars are often referred to as ‘Ball Mason’ jars after this manufacturer.  The jars were hugely popular in America in the early 20th century and were central to the home-canning revolution that boomed until the post-war 1950’s era saw a decline.

Fortunately 21st century householders are now re-discovering the joys of food preserving, so that glass preserving containers such as the Mason Jar – and in Australia the more familiar Fowlers Vacola Bottle – area again becoming a sought-after commodity. 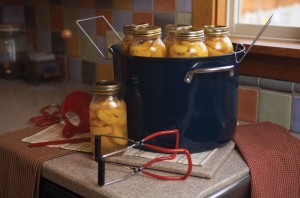 About the Author: Donna Scotson